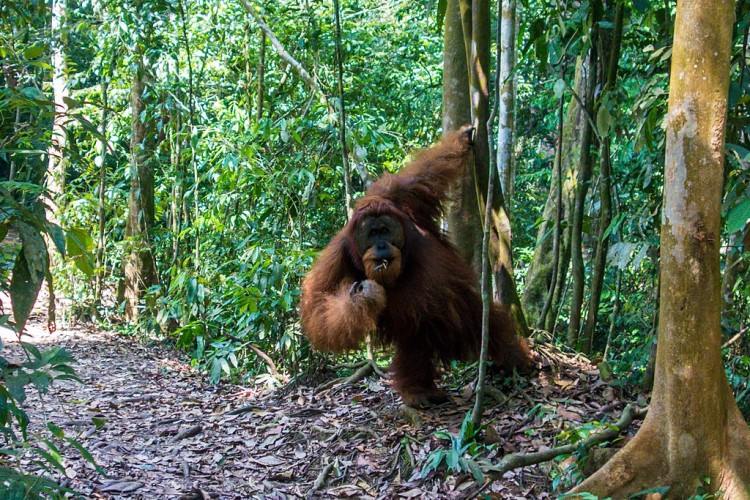 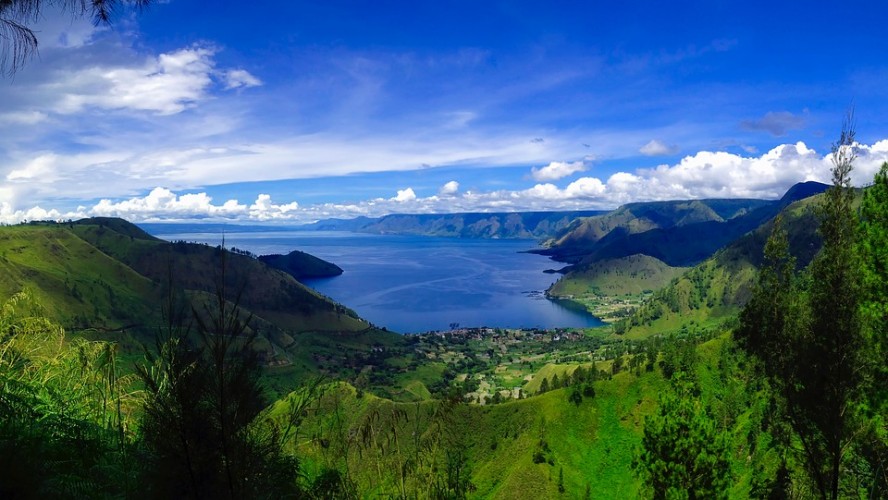 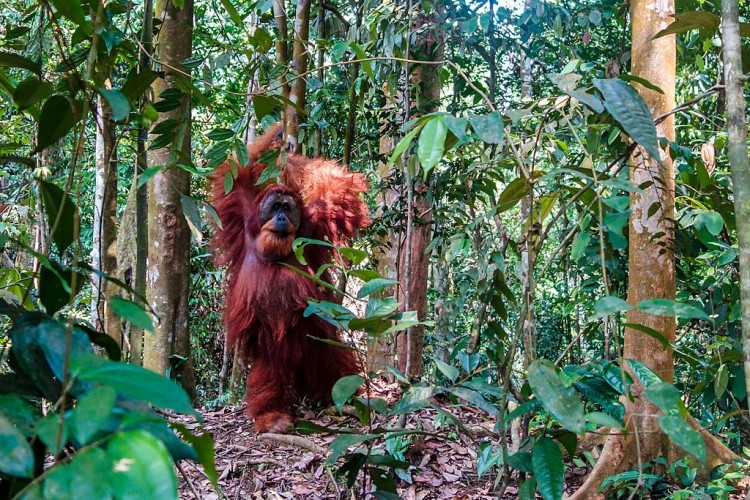 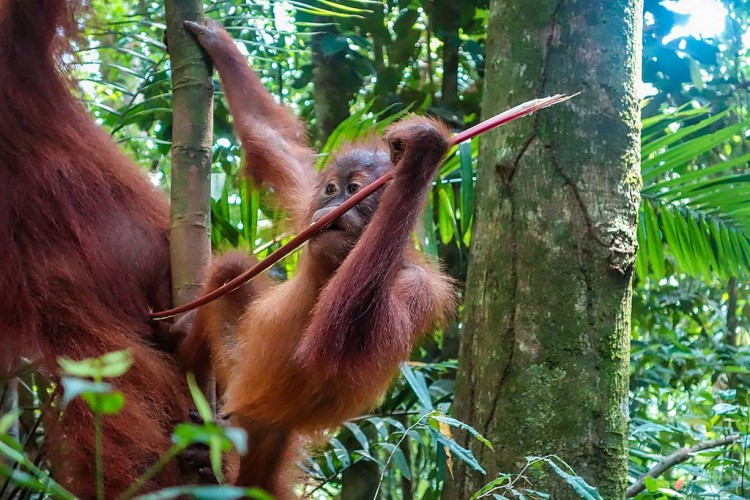 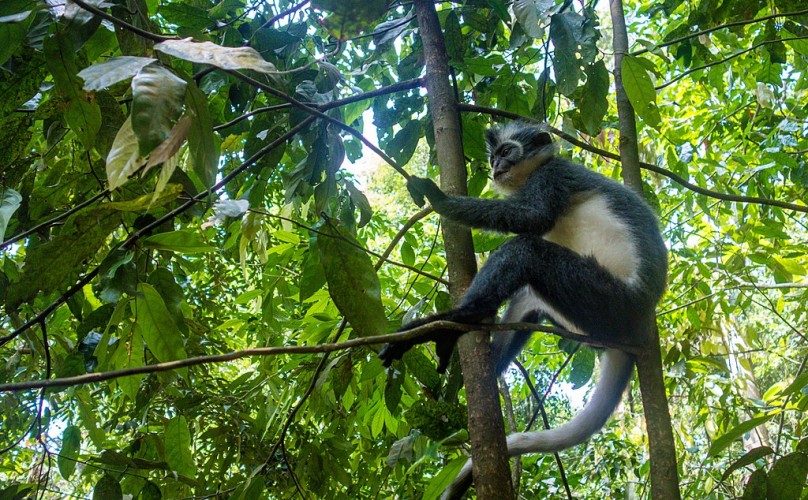 You will be picked up at Medan Kualanamu Airport or your hotel in Medan and directly depart to Bukit Lawang. You can see oil palm and cacao plantations with some countryside landscape along the way. Arrive in Bukit Lawang and check in to hotel. Overnight stay in Ecolodge or Hotel Rindu Alam or similar.

After breakfast walking to the jungle to start a jungle tracking to explore the nature of Leuser National Park with their flora and fauna, there will be possibility to see Orang Utan in their own habitat and other kind of animals such as Thomas leaf monkeys, long tail macaque, gibbon, black gibbon and other kind of flora and fauna of tropical rain forest. This trekking will take about 3 hours, then return to hotel.

Drive to Berastagi, a mountain resort with its refreshing weather and magnificent mountain scenery which has an abundance of flowers, vegetables and fruits (most famous of which is the “Marquise” passion fruit). Stay in hotel Grand Mutiara or similar.

Remarks: Those who bring camera/video in the Orangutan site will be charged additional US$ 6.00 for camera and US$ 18.00 for video.

After breakfast, depart to Parapat to see Lake Toba. Along the way you will stop at Dokan, a traditional Batak’s Karo village, and then stop to see the 120 meter Sipiso-piso waterfall which is located in the Batak highlands. The beautiful fall is formed by underground river that then plunges from a cave into Lake Toba caldera.

Next stop will be made at the village of Pematang Purba to observe the long house constructed on pile works about two centuries ago and was known as the dwelling of the ancient Batak Simalungun Kings. Last stop before reach Parapat is Simarjarunjung, the highest point to view Lake Toba. Arrive in Parapat in the afternoon and you will cross the lake to Samosir island. Stay in Tabo Cottage or similar at Samosir Island.

Today you will spend a full day exploring Lake Toba and Samosir island by car. Visit Ambarita whose villagers are known for making chairs and tables out of stone and which was the infamous execution place of the Siallagan Kings. Stop at Simanindo where you’ll be treated to a performance of Batak Toba traditional dance called Tor-Tor and visit the fascinating museum.

Continue to Tomok to see the tombs of former Sidabutar Kings. Along on this trip you may have the time to stop at a local school to see the activities of young children and visit the village where the people make traditional hand weaving. Free time. Stay in Tabo Cottage or Hotel Toledo Inn at Samosir Island.

Breakfast and free time until you cross the lake by ferry to Parapat. Drive to Medan through the plantation route and a historical city of Pematang Siantar. You may take a coffee break at Hotel Siantar built in 1912. Arrive in Medan in the afternoon where you will be transfered to the airport for catch your flight to next destination. End of tour.

The booming city of Medan, capital of North Sumatra, is an economic hub and commercial center for the province. Although becomes more important city from economy point of view, trip down to Medan wouldn‰Ûªt be complete without a visit to its nearby tourist attractions such as Lake Toba. Situated right in the middle of the lake is Samosir Island, which hosts some really interesting traditional villages. One of them is Tomok Village. Brastagi, Sipiso-piso Waterfall, Maimun Palace and The Great Mosque are another tourist sites in Medan. In addition, Medan has also a cultural and culinary diversity that deserves to be seen and perceived. With a private tour, you will be able to travel comfortably in Medan. Private Tour is a tour package that is designed specifically for you personally. Moreover, accommodation and transportation has been arranged before you arrive in Medan. Add to this, a guide will accompany you during the trip in Medan.

"Beautiful Highland that need a serious touch by government."

It's a waste to ignore this beautiful highland called Brastagi, a land which Bataknese live, so many interesting places such as Tongging waterfall, Gundaling, Simalem and many others places in...

"Cool area to refresh your mind"

The place is a cool place around Sinabung Mountain with a few good hotels around. The food options around is also interesting.

We took a shared van from Parapat, Lake Toba to our hotel in Brastagi. The place was fresh and cool. From our hotel, we could see Mt Sinabung on a clear day. The town area is not very big and you can...

Read All Reviews / Write A Review